By 1967, the DGWS had allowed intercollegiate women’s athletics for ten years, but the formation of teams and national competitions was slow. Athletes felt alone and often powerless to change the unfair system—if they were even aware of it. Sports beyond tennis or intramurals for sororities remained taboo and unladylike in many places. Women’s organizations disagreed on the level of competition and the giving of scholarships for women. Scattered approaches challenged the formation of women's sports teams and hindered regional conferences and national championships. Prior to the founding of the Association for Intercollegiate Athletics for Women (AIAW) in 1972, tournaments and games were few and far between. The games and tournaments available to Trinity women were often against much larger schools with much greater funding. The level of competition improved with the cultivation of more women’s non-scholarship athletic programs and the integration of women’s athletics into the men’s SCAC conference. 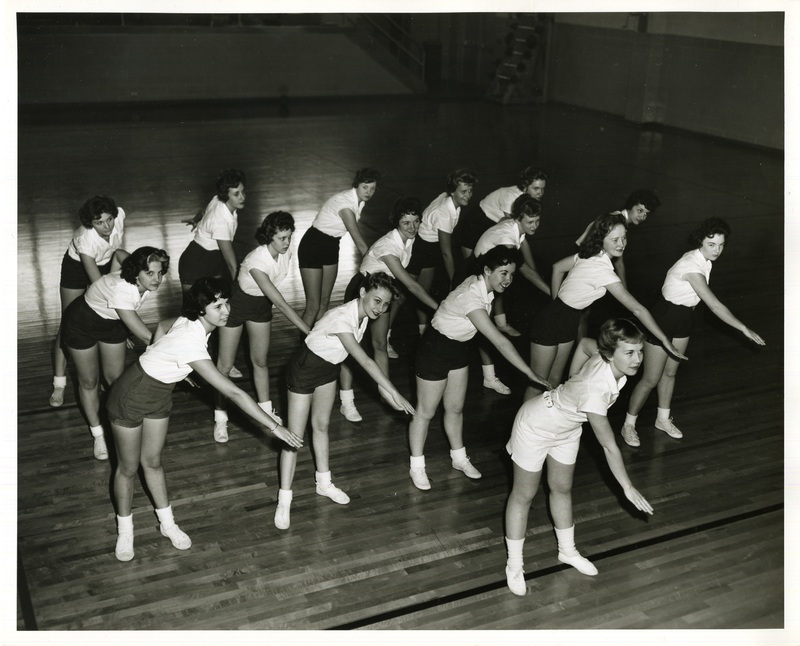 Prior to intercollegiate sports, women’s sports participation was limited to intramurals and physical education classes. When the Sams Center was built in 1962, three rooms were reserved for “Women’s Physical Education,” where women learned how to play and coach speedball, badminton, softball, and volleyball. In the physical education department women and men had separate Theory of Sports classes and activities classes. 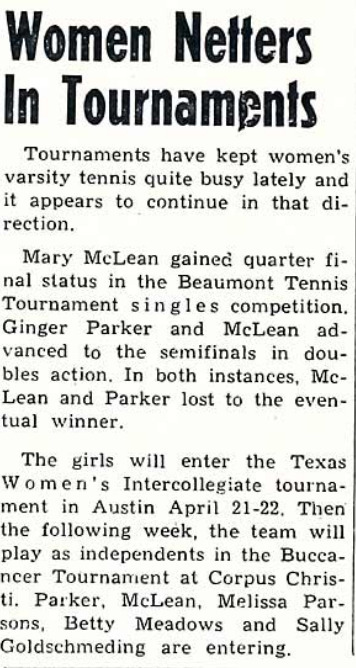 Mary McLean Wilson, class of 1969, participated in a tennis tournament the spring of her senior year with other Trinity women as an unofficial team. Though an enjoyable experience for McLean Wilson, she said that she felt cheated because she didn’t get to compete except for that one meet. With few local tournaments and no funding from the university, Trinity women could only attend the USLTA championship. There were no women’s intercollegiate teams at Trinity until 1971, so McLean Wilson played extramural tennis. Rushing Poteet registered and sponsored the team, so the women could attend tournaments. 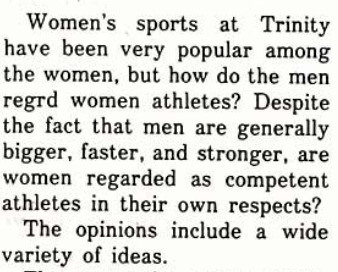 This article displays opinions from some women athletes about whether they receive respect from men’s athletes. Responses seemed to depend on the person and the sport. A women’s tennis player noted no difference, but in basketball, another student felt there was little respect. Even if they felt respected when interviewed, all interviewees said that they were not taken seriously at first. The women’s tennis team’s athletic scholarships gave them on-campus privilege in the form of respect and prime practice locations in the Sams Center. The women’s basketball team, much younger in comparison, was not as highly regarded. Basketball was considered a more masculine sport, and thus less “womanly,” because of its connection to lower socio-economic status and connection to Black communities which drove it further away from the white, euro-centric standard.

The Southern Collegiate Athletic Conference (SCAC) finally included women in 1991. Prior to that, women’s teams often had to face DI programs with much more funding because they had a lack of non-scholarship opponents. This lack of non-scholarship competition led to poorer season totals than the men, who traveled more to face DIII competitors. However, Jill Harenburg O’Neil, class of 1978, recalls that “it was an honor to play UT Austin, Baylor, Southwest Texas” and that she didn’t feel very intimidated by them. She felt her teammates had great camaraderie and loved playing, so the winning record didn’t really matter.

In 1993, Midnight Madness—a festive midnight event that celebrates the first official NCAA basketball practice—was exclusively for the Trinity University men’s basketball team. Although things had improved for the women’s basketball team in terms of  practice times and locations, they still lacked equal press and esteem. Yanika Daniels, class of 1996, was incredibly frustrated and shot baskets while others set up for the event and as the men's team warmed up. The men’s coach yelled at her and ordered her to leave the court. Click here for her oral history quote. Afterwards, she sent in a letter to the Trinitonian protesting the “blatant and very arrogant display of unjust treatment” she had faced as a female basketball player. With the awareness Yanika bought, the women’s team was allowed to play in Midnight Madness in 1994, the following year, but she felt like she paid for that. The men’s team ostracized her. As the first black women’s basketball player in Trinity’s history and one of the few black students on campus, Yanika felt an extra burden. She reflected that she recognized the discrimination against the women’s team because she was predisposed to the unfairness.
← Budget
Competition