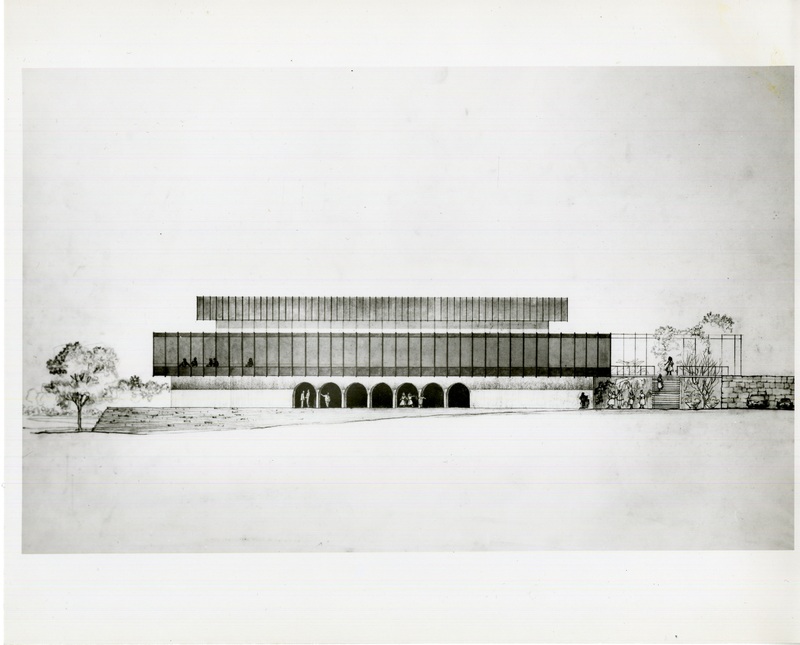 Concept drawing of a campus gymnasium.

When Trinity moved to the Skyline campus on an old limestone quarry in 1952, all structures had to be built from the ground up. Prior to the opening of the Sams Center in 1963, there was no gym on campus. Once the Sams Center opened, the new courts and rooms fostered sports as an integral part of the on campus experience. In 1972, the U.S. Congress passed Title IX. On a college campus like Trinity after Title IX, women were entitled to intercollegiate athletic teams, university recognition, and a budget. Despite the passage of this important law, female athletes throughout the country still faced inequities. Trinity had built its gym, the Sams Center, in the 1960s, before Title IX. As such, the planning for the facilities had not taken women’s athletics into consideration. Male athletes had access to multiple locker rooms and training spaces, and a whirlpool at the Sams Center, but had a fraction of these spaces. The women also had subpar practice times. It took seven years after the passing of Title IX before Trinity began to address these issues. The construction of the Bell Center in 1992 expanded the insufficient space and showed a long-term commitment to women’s athletics. The spaces may have been built, but the mindset of women’s athletics still needed major overhaul. When able to compete in the Bell Center, athletes using the space felt important and valued to the school.
Sams Center →
Sports Centers