In the 1950s, athletics challenged the social norms of femininity/womanhood. In an era of strict gender roles that carried the expectation that women were delicate housewives, it was not considered feminine to play sports. Some experts believed that sports were too dangerous for women. In the 1920s, physicians argued that women were too fragile to participate in athletics and suggested that strenuous exercises could disrupt a woman’s bodily make-up, potentially causing her reproductive organs to fail. Therefore, men participated in the sports industry more because people believed they could handle more strenuous activity. Men played on a full-length basketball court and women played on a half-court. 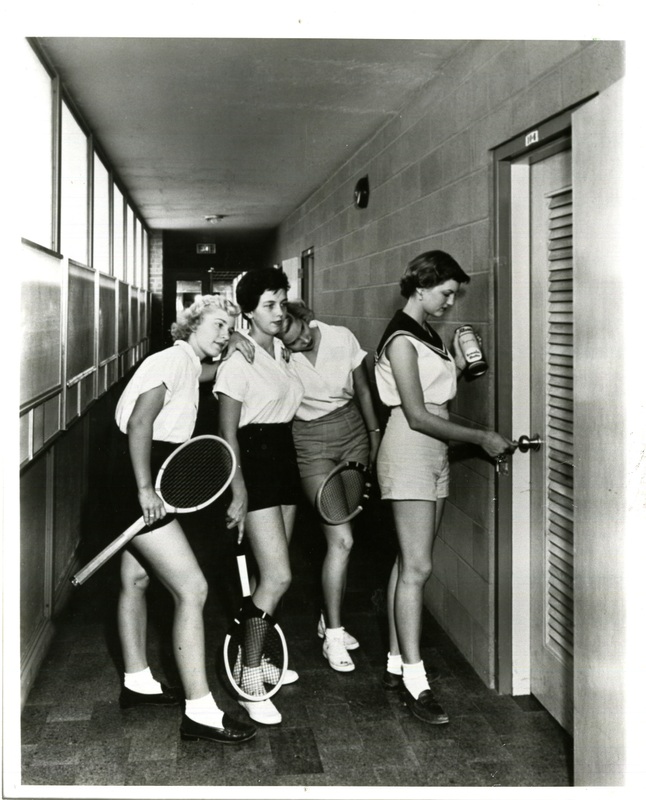 Even when women proved themselves during World War II by filling traditionally male roles in war production and factory work, such as trained artillery gunners, laboratory technicians, cargo transporters, and fire officers, after the war ended, the U.S. government pushed them to return to homemaking. Gender stereotypes like this stigmatized women who participated in athletics and other “male” associated activities and fed the perception that female athletes were unfeminine or potentially gay. When more straight women began participating in athletics, this resulted in an increase in homophobia because people did not want a "dyke image" for the face of women's athletics. There is a lack of research on homophobia in women's athletics considering few women were "out" in this time period since being gay was extremely unaccepted and rarely conversed about.

In the latter half of the 20th century, some called these women lesbians and slurs to insult their womanhood for not pandering to patriarchal and heteronormative roles. Athletics was often an opportunity for gay women to express their strength and become comfortable in their own bodies. Homophobia limited the potential of these women to have a positive experience from sports and, sadly, this discrimination affected a significant population of women in sports, causing them to feel othered and marginalized in their identities as student-athletes. Gender stereotypes also plagued female athletes at Trinity. While playing tennis seemed acceptable because many students viewed it as a “feminine” sport, women who participated in other sports faced backlash and name-calling from their peers.

In an oral history interview with Lynn Walker Luna and Sue Bachman Henderson, Betsy Gerhardt Pasley asks about the potential of gay athletes in the locker room. What's unearthed are the double standards of women's and men's athletic friendships.

PASLEY: ...So we were playing at a time where there were some gay athletes in our locker room, that we didn't know, because they weren't coming out.

LUNA: And it wasn't talked about. It wasn't even thought about, at the time.

PASLEY: I was going to ask you, was that even⁠—rather than speak for myself, I'll ask you⁠—was that even in anybody's mind? That there was⁠—

LUNA: Really? I never would have thought it! Not like we didn't hang⁠—you know, when you're at sports, and you're hanging on each other. But really, it was never-⁠—of course we all did that.

BRACKENRIDGE: Well, the guys did that, too.

LUNA: Exactly. But did they ever say that?

BRACKENRIDGE: Nobody said that.

HENDERSON: But I'd say no, I don't think it was ever really an issue. I mean, I look back now at particularly, well, in high school and in college, that a lot of friends that I had have since come out as being gay. Doesn't impact me. But when on the court, the goal was all the same, was to win the game.