Running up that Hill 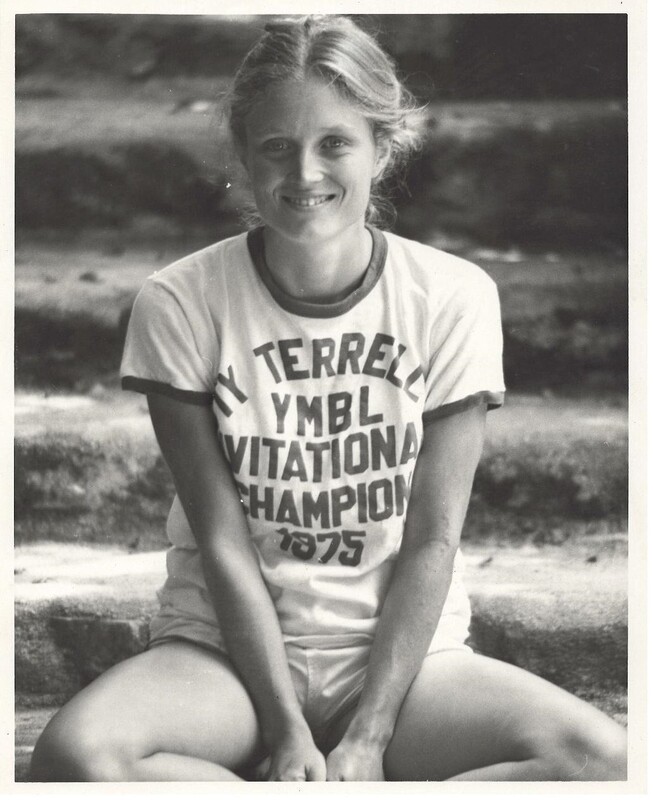 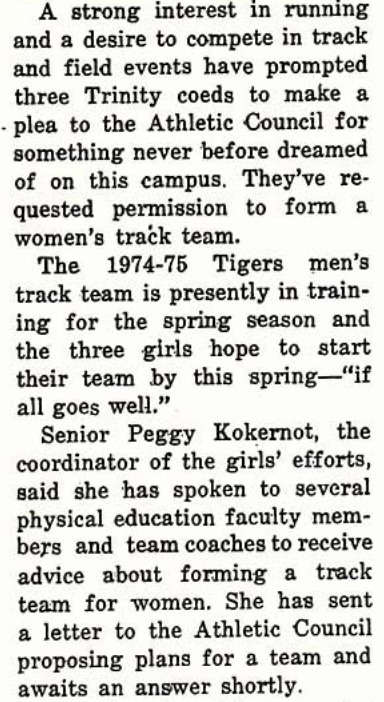 To many, there was not a visible impact of Title IX on Trinity’s campus until Peggy Kokernot created the track team.

Alison Taylor, class of 1977, played softball and basketball at Trinity. Her time playing basketball was split between intramural and intercollegiate, which boosts Taylor’s claim that women’s sports were treated as intramurals because she made that transition so easily.

At one point, female athletes lacked weight training, facilities, and coaches. Taylor remembers the softball team’s excitement when they rode on a bus with an attached toilet for an away game. This was a luxury compared to the yellow school bus that the team usually rode on. Many of the games were against local schools like Incarnate Word and St. Mary’s, so there wasn’t as much need for it, but the smaller budget also kept the team from scheduling bigger tournaments further away. Click here for her oral history quote.

Betsy Gerhardt, who joined Peggy Kokernot in starting the women’s track team, made a profound impact on Taylor.

TAYLOR: I don't remember⁠—matter of fact, you and I discussed this, because I didn't think Title IX happened until 1977. And the reason is because I didn't notice a darn thing different until you started that track team in 1976, 1977. Do you remember that? 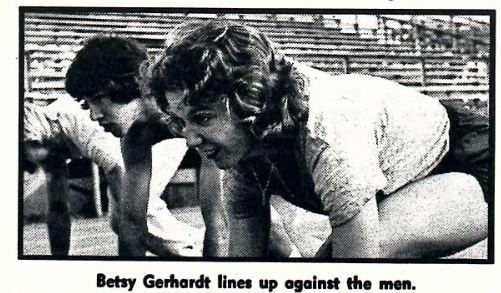 Trinitonian clipping of Betsy Gerhardt preparing for a run. 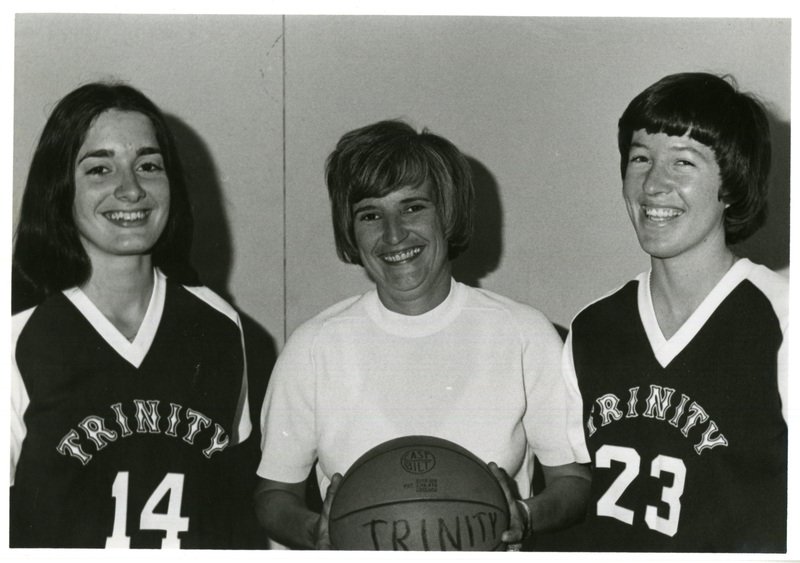 Women continued to advocate for many things, but a common goal was still the fight for gender equity. Former athletic director and coach Libby Johnson expressed frustration about incorrect gender associations. She was also upset by the local press. Here is what she quoted as saying in the Trinitonian, April 2, 1976.

“It’s the biggest crock of farce when people say that women are going to sexually damage themselves by playing sports.”

“I think the answer to these attitudes is education and awareness. Women don’t want to be equal with the men at all. If the Trinity football team gets $20,000 dollars, we are not asking for that amount. We are just asking for a share on an equal basis if we have a women’s team."

“We weren’t getting any publicity at all. They were treating us like some kind of intramural team or a team from the YMCA. I mean, we’re an intercollegiate team that competes on the same level as the men in sports like basketball. I called them up and threatened that we were going to play a game topless."

Even still, many women did not really recognize this unequal treatment as an injustice until after their time at Trinity—as many alumni, some including Alison Taylor '77, Shelley Story ‘94, and Kerry Eudy ‘94, noted in their oral history interviews that they “were just happy to be playing.”

Women participating in sports had not been normalized and was much less expected at a collegiate level. These women were appreciative to be able to play in college because, historically, women had not had this opportunity. At some point though, women’s mindsets changed as their history of disrupting the dominating masculine norms persisted. Women began challenging the authority of masculine norms in sports.

← Serving to Start the Point
Problem Then, Problem Now →
Athletics on the Hill
Running up that Hill