The Depth of Division III Athletics

In 1910, the Intercollegiate Athletic Association of the United States (IAAUS) changed its name to the NCAA. The primary purpose of this organization is safeguarding the athletes within the association and regulating college sports and programs. Initially created to protect college football players, the organization had to expand its jurisdiction as collegiate athletics grew in scale and importance nationwide.

After smaller colleges complained about the lack of recognition and championship opportunities that this structure afforded them, the NCAA responded by creating more divisions within the organization and ensuring that each division had an equal number of championships. Except for those schools considered “major institutions,”  all other schools were given the option to choose their division. The creation of those divisions resulted in the existence of what is known as Division III Athletics. Division III Athletics is currently the largest division in the NCAA and is the home division of Trinity University athletics.

When the NCAA created Division III Athletics in 1973, its aim was to facilitate a more well-rounded college lifestyle for the student-athlete.

The idea was to allow a student to be equally academically and athletically involved on their campus while still having time for life outside of school, unlike in Division I, where athletics are the students' primary focus. Division III aims to create a foundation for student success by encouraging a mutually beneficial relationship between athletics and academics.

To emphasize the priority that this division places on academic excellence, member schools do not offer athletic scholarships. This distinction makes Division III unique and it fosters a more holistic student-athlete experience.

Portia Hoeg, class of 2001, believes in the virtue of the Division III experience. Hoeg said that Trinity truly prepared her for life beyond college, and in her oral history interview she described the leadership skills she learned from her campus involvement. She did not think she would have gained the same experience if she were to have gone to a bigger, public, non-Division III institution. Click here to listen to her oral history quote.

Trinity was not always a Division III school, however. In 1982, Trinity moved to the Division III model for all sports except for tennis, which remained a Division I sport. When the University decided in the 1990s to stop giving tennis scholarships and become a fully Division III institution, many student-athletes found the change upsetting. The decision caused a major uproar within the tennis community. Student-athletes, upset that they were losing their athletic funding, mounted protests. Despite the controversy, full compliance with the values of Division III required the University to make the transition to being completely academically funded, with no hold-out programs. 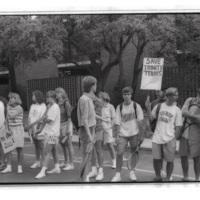 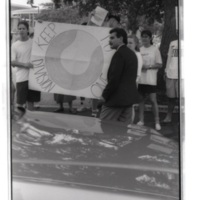 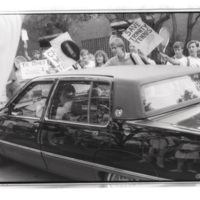 Depsite the protests over the termination of the tennis scholarships, student-athletes eventually began to see the overall positive impact of Division III.

Research and oral histories provide evidence that Division III institutions allow for student-athletes to have a more well-balanced college experience. Many athletes mention a variety of qualities gained at Trinity from being able to participate in other activities besides their sport.