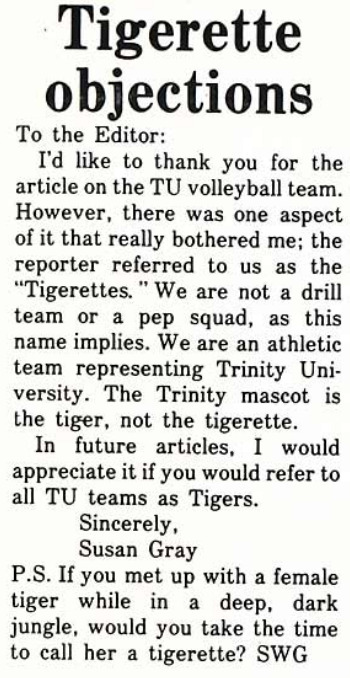 There have been a number of important moments when female athletes at Trinity decided to take a stand and speak out about issues that needed, and still need, to be addressed. In addition to those who have fought for equality for women's athletics on campus, many have also made important stands on intersectional issues. 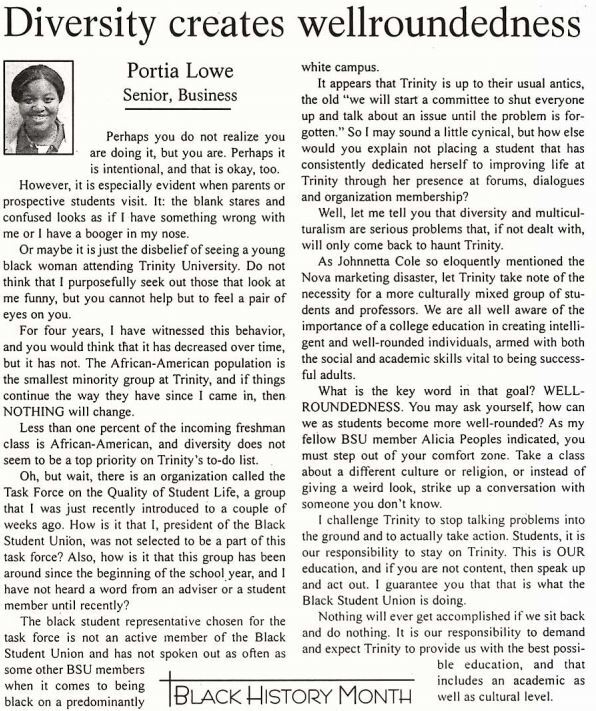 For example, Portia Hoeg, class of 2001, has long advocated for more female minority representation at the Division III level and continues to do so in her capacity as a conference commissioner. Hoeg says that it is critical for women to see other women who look like them in positions of authority. As notes in her oral history interview, "I still think, your representation matters, and you know you really need to see her in order to feel like you can be her." 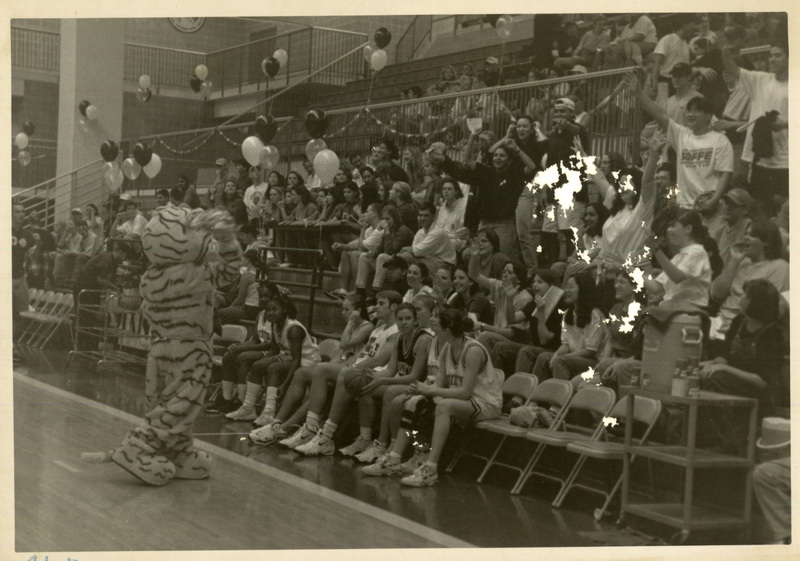 Mascot LeeRoy gearing up the crowd at a Midnight Madness event

Yanika Daniels, class of 1996, remembered the backlash she faced from the men’s basketball team for writing a letter to the Trinitonian about the women’s team not being allowed to participate in Midnight Madness—a festive midnight event that celebrates the first official NCAA basketball practice. She argued that having Midnight Madness only for men was wrong since the women’s team played the same sport and should also be able to celebrate the start of their annual season as well.

Her strong demands for equal treatment threatened the power and authority of the men’s team, as well as many male players' views about gender norms. As a result of their actions, she felt ostracized and excluded. Listen to her oral history quote. 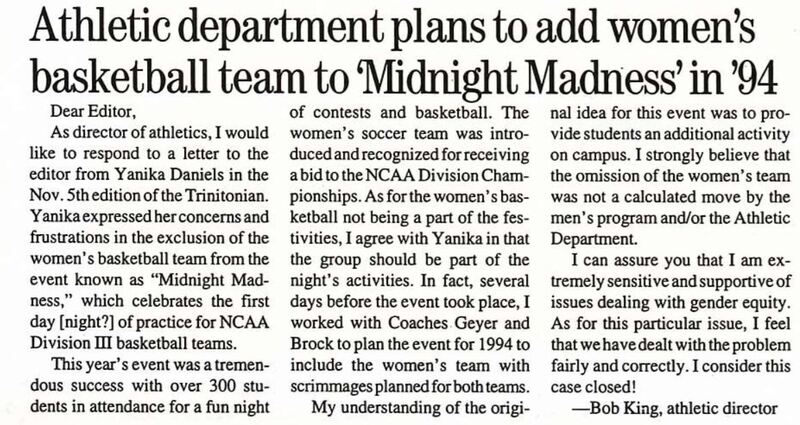 BRACKENRIDGE: They should be very grateful, because I think it was a turning point in that attitude that you could speak up. And yet the racial element came in. But at any rate, I think it was a really important event wider than just the race, but saying something about women.

BRACKENRIDGE: The same, right—women play and women's sweat and women, they should be accepted on the same level. So I think it's really important, a wonderful story.

DANIELS: That is what it was. I think the interesting thing—I think what you're saying is really important to me, because that was the issue. And in those moments, or at that time, it was almost like the commonality couldn't be really grasped or touched, because there was this overlay of race. But in actuality, the fervor behind it came from my background and experiences with injustice, and sort of like this heightened sensitivity to it. But what I was pushing for had nothing to do with race. It was about women's and men's sports. I feel like the solidarity that could have arisen at that time was clouded by the fact that I was also a brown woman.


Mary Walters had to continue to fight for equality throughout her career as an athletic director. Walters, class of 1979, went on to be involved in collegiate athletic administration as the athletic director of both men’s and women’s athletics at the University of Texas at Dallas (UTD). She not only had to advocate for the women’s program, but also the existence of athletics at UTD as beneficial to the student experience because it made them more organized and gave them a sense of belonging.

The fear of athletes coming to the University and bringing down academic reputation was also present at Trinity. Trinity’s creation of the TIAA non-scholarship conference and eventually joining the NCAA Division III was a way of maintaining the academic focus and rigor that appealed to UTD’s values. UTD is currently in the same athletic conference as Trinity. Click here to listen to her oral history quote.