The Power of Coaching

On February 1, 1980, the Trinitonian published an article titled “Women's Athletics hang in Balance." One student quoted in the article asserted that “Miss J. is women’s athletics.” Coach Libby Johnson really did make all the difference for women's athletics at Trinity. At a time when most women athletes were just eager to play, Coach Johnson fought to ensure that they would have equal access and equal opportunities.

Sue Henderson, class of 1977, recalls the importance of having Coach Libby Johnson as her coach and mentor. Henderson remembered that when her tendency to stay up late caused her grades in her early morning classes to suffer, Johnson intervened. The Association of Intercollegiate Athletics for Women (AIAW) prohibited the use of tutors, so Coach Johnson had Henderson stay with her. Henderson found this invitation, which enabled her to pass her finals and stay on the basketball team, touching, especially since Coach Johnson had only known her for a few months. Such care was very much in keeping with Coach Johnson’s reputation for having high expectations for her athletes, but offering guidance and support to get them there.

HENDERSON: The thing that I share all the time is that, honestly, I probably would have flunked out of Trinity without Libby Johnson. I was having a really good time. I was a good kid. I wasn't drinking. I wasn't doing drugs. But I was staying up till all hours of the night, and this lovely lady to my left had me taking all eight o'clock classes.  And Libby came to me about a week before finals and said, "You're coming home with me." And you are going to live with me until finals are over, and you are going to study, and you are going to pass." And I did! First semester of freshman year. And we had only started basketball in November, so she didn't know me well. But yeah, she really was instrumental.
LUNA: She focused you.
HENDERSON: She focused me. 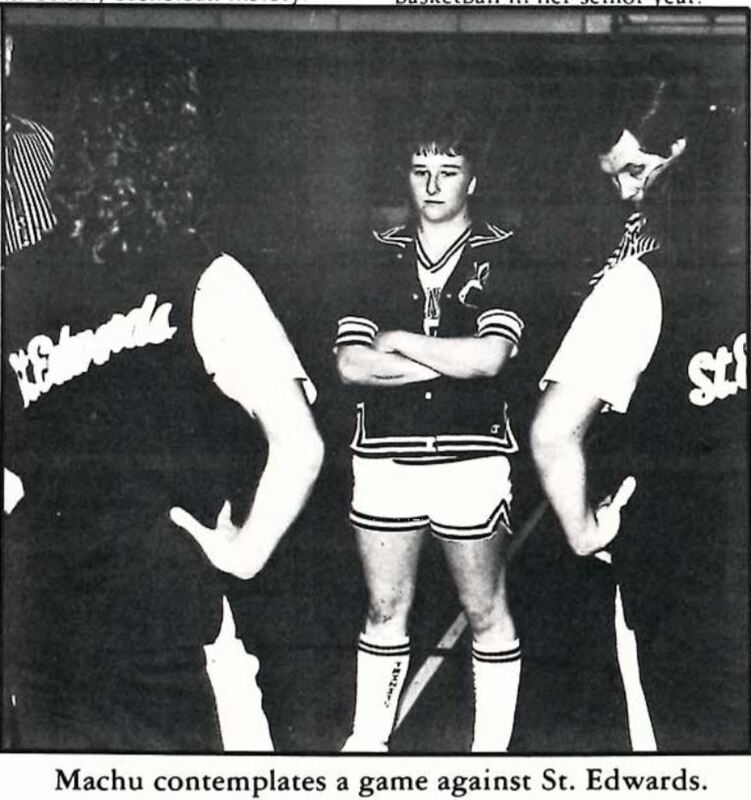 Teresa Machu, class of 1984 and an outstanding multi-sport athlete, spoke highly of Coach Johnson’s influence at Trinity. Machu wondered what it would have been like had Johnson been at Trinity longer, but she made clear that despite her relatively short tenure, Johnson had a tremendous influence on Trinity's women athletes. Machu, who coached Trinity basketball from 1988-1992, believed that she absorbed some of Coach Johnson’s traits.

MACHU: And my thought was wow, I was fortunate enough to be able to be coached for her, by her for a very short period of time, but I often wondered what it would have been like to been able to experience that over a longer period of time because she was so well-respected and loved and—by the players that I was able to meet. And I think she, from what I heard, really fought hard for women's athletics and yeah. I think back—I think well, I probably was just this naive young thing that all I wanted to do was play. I don't think I ever thought about that side of it, and thank goodness we had women like Libby Johnson to lead the way. And, maybe subconsciously somewhere I've kind of taken on some of those qualities too myself. And maybe every female coach that has had to fight for a batting cage or for assistant coach, or for equal tine in the gym, or an equal budget or anything like that...we've all taken on qualities of Libby Johnson.