Intercollegiate athletics provide women with opportunities to elevate and empower themselves. The passage of Title IX created new opportunities for women to partcipate in collegiate sports, though it did not in itself bring equality. Even long after the implementation of this legislation, women still faced discrimination, including discrimination based on race, sexuality, and other identities. For this reason, women are still fighting for equality in athletics (and beyond) today.
That said, Title IX paired with the formation of Division III athletics changed the game for women. Not only did women gain new opportunities to participate in sports, but they were able to do so in a division that allowed them time to engage in other activities and interests. At Trinity, women athletes can compete at a high level, pursue a higher education, and take advantage of campus extracurriculars. Trinity women athletes have had to fight hard for equality, but their drive combined with their Trinity educations produced powerful women who continue to excel long after their time as student-athletes have come to an end. 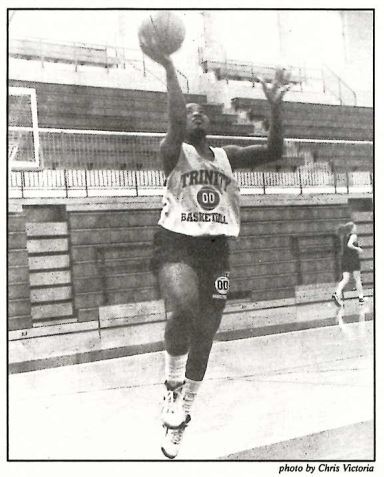 Athletics empowered women and encouraged others to bring change into the sports world. Portia Hoeg, class of 2001, exemplifies the characteristics of a multidimensional woman who not only is empowered from her hard work, but inspires others to work hard as well. Click here to listen to her oral history quote.
Mary Walters had to continue to fight for equality throughout her career as an athletic director. Walters, class of 1979, went on to be involved in collegiate athletic administration as the athletic director of both men’s and women’s athletics at the University of Texas at Dallas (UTD). She not only had to advocate for the women’s program, but also the existence of athletics at UTD as beneficial to the student experience because it made them more organized and gave them a sense of belonging.
The fear of athletes coming to the University and bringing down academic reputation was also present at Trinity. Trinity’s creation of the TIAA non-scholarship conference and eventually joining the NCAA Division III was a way of maintaining the academic focus and rigor that appealed to UTD’s values. UTD is currently in the same athletic conference as Trinity. Click here to listen to her oral history quote.
After years of women’s voices being silenced in the sports world, now that world serves as a place of activism and justice because of efforts from the “real” athletes. Hopefully, this exhibit makes those contributions visible.
← Life After Trinity
Empowerment